I mentioned this in my previous post on Salzburg, Austria here but I’m beyond OBSESSED with the Sound of Music. It always makes me laugh that the Germans and Austrians have no idea what the Sound of Music is when I mention it. I grew up watching this movie (remember how it had two VHS tapes?) and can literally recite every scene and song.

My family secretly thinks of ourselves as the “von Wagner” family. I mean, there are 5 girls and 2 boys in my family…and we are almost in the correct order as in the Sound of Music. My siblings and I *may* have acted out the songs when we were young kids!

Instead of spending 30 to 40 Euros on one of the tour groups in Salzburg, why don’t you just make your own Sound of Music tour?! I’ve made a list of all the essentials locations here…enjoy and let me know what you think!

This tour starts at the Salzburg Hauptbahnhof. I’ve included a map at the bottom in case you aren’t starting from that location!

1 – Mirabell Palace and Gardens: This was the location of the scene when Maria and the kids are singing “Do-Re-Mi.”

2 – Herbert-von-Karajan-Platz: Not a location that many people remember but when the children are singing through the city, they go through this square.

3 – Felsenreitschule: Right down the street from Herbert-von-Karajan-Platz is the Felsenreitschule where the Kaltzberg Festival took place. This is the final time the family sings together before fleeing Austria for Switzerland. Unfortunately, I couldn’t get inside here (it was locked!)

4 – Residenz Square and Residenz Fountain: On the way to the von Trapp residence, Maria goes through this square while singing “I have confidence in me.” Unfortunately, during the winter months, all the statutes and fountains are covered with plastic/glass to protect them!

5 – St. Peter’s Cemetery: After escaping undetected from the Kaltzberg Festival, the family hides behind the headstones in this cemetery. This is the final confrontation between Captain von Trapp and Rolfe. In the movie, this cemetery is part of the Abbey. However, in real life, it is entirely separate! 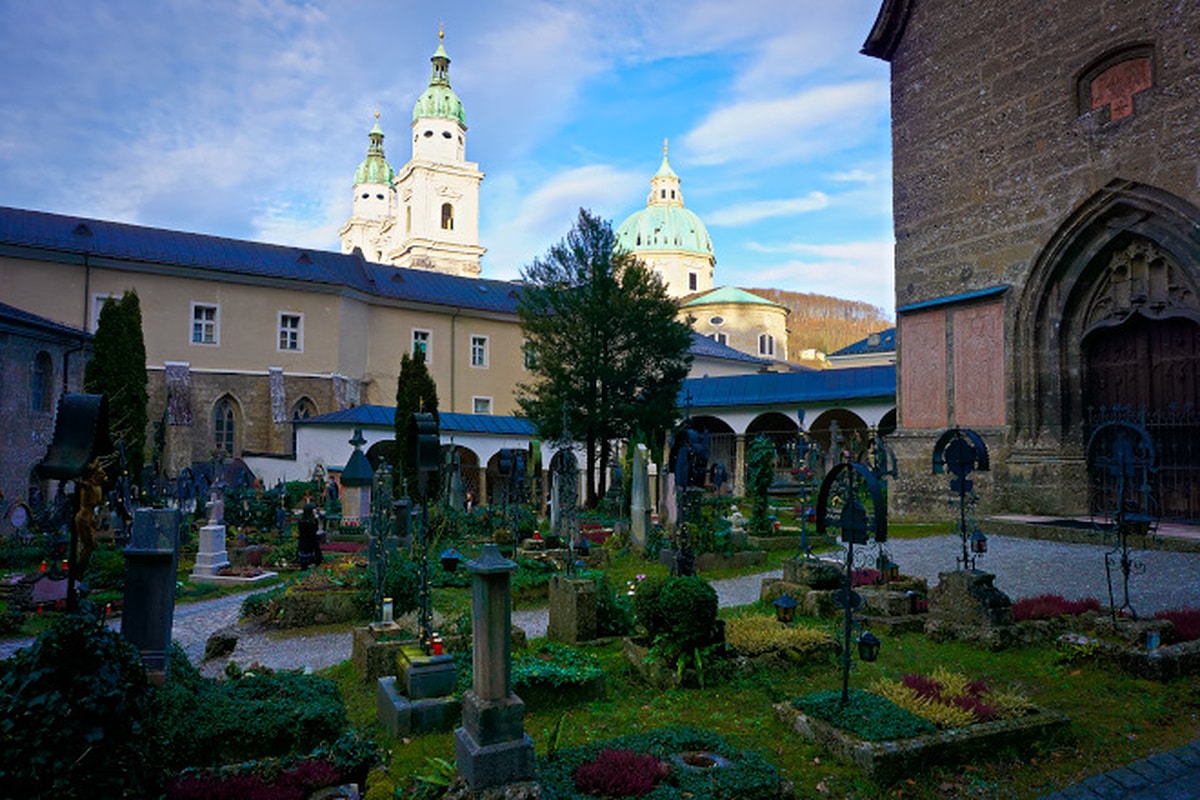 6 – The Benedictine Convent on Nonnberg: The backdrop for the Abbey. The nuns sing “Maria” here. In real life, Maria was actually a nun-in-training (is that what they are called?) here and this is where Maria and Captain von Trapp were married! You can’t actually go inside it but you can go up to the gates and visit the church.

7 – Leopoldskron Palace: The facade of this palace (on the lake side) was depicted as part of the von Trapp home.

The rest of the scenes were filmed in Salzburg’s surrounding areas. If you have more than a day, I would highly recommend checking out the rest of the places. Unfortunately, I was only in Salzburg for the day so I was only able to tour the movie locations within the city. However, I guess that’s just an incentive to go back to Salzburg! :)

1 – Frohnburg Palace: This palace served as the facade for the courtyard and front of the von Trapp home.

2 – Hellbrunn Palace: The famous gazebo is located here! It is where Liesl and Rolfe sing “I am 16 going on 17” as well as the location where Maria and Captain von Trapp finally kiss! :)

3 – Anif Palace: This palace was used for some of the panoramic scenes and exterior shots during the movie. However, it is a private residence so you can’t really view it!

4 – Hohenwerfen Castle: The picnic scene between Maria and the von Trapp children (as well as the beginning of the song “Do-Re-Mi”) was filmed on the hills of this castle.

5 – Mondsee Abbey: This is the church used in the movie to film the wedding scene.

6 – Fuschl, St. Gilgen, and Lake Wolfgang: These two towns and lake provided the aerial views for the beginning of the movie.

Did I miss any of your favorite Sound of Music locations? Let me know in the comments below!