There’s no better way to experience a city than eating your way through it! On my first trip to Greece I knew I wanted to take a food tour (still don’t know how I haven’t been to Greece before now!). I reached out to Urban Adventures and booked the Tastes of Thessaloniki food tour. And man, did they pull out all the stops! I had the sweetest guide Tereza, who was my age. The only other person on the tour was also around my age so we were able to discuss much more than food. I was in Greece about a week before the referendum and given that I study politics, I nicely grilled Tereza about the entire situation. It was so fascinating to get her perspective!

Besides talking politics, history, and architecture (Tereza found out one of my soft spots and proceeded to point out the coolest buildings to me), I ate and ate and ate and ate. I literally didn’t eat the entire day after the tour because they gave us so much food. And it was all included in the price!

The tour started out with a traditional Greek coffee. Because they don’t filter coffee in Greece, it is a lot grainier than what I’m used to drinking. Plus, they make it over gas, not electric. A fun tradition after drinking your coffee (but don’t drink the grains!) is to “read” your coffee cup. You flip your coffee cup upside down on your plate and remove it once you see the grains creeping out. You then “read” the grains on the side of your cup. The cup above is my coffee during its reading. I swore I saw a sailboat…must mean something! ;)

Aren’t those men just the cutest? Seriously, all the old Greek men spend their days at coffee shops (I think called Kafeneios) drinking and chatting. We stopped at one of these shops and ate a traditional breakfast food called “bougatsa.” This was definitely my favorite food on the entire tour. Bougatsas are a pastry filled with either feta cheese, beef, or cream. I seriously ate the entire cream one and most of the feta cheese. My goal is to learn how to make this. However, shops in Greece that want to make bougatsas must have a special license!

While walking around downtown Thessaloniki, we enjoyed a typical gyro at an outdoor cafe. I’ve never had a gyro with french fries inside but I’m now converted. Tereza explained that there are two main gyro places in the downtown area of Thessaloniki. One has better bread and one has better meat. Ahhh, decisions decisions!

We stopped by a family-owned cheese store and the kind owner let us sample almost everything! I never knew that cheese could come in so many different forms and textures. Yummmy! 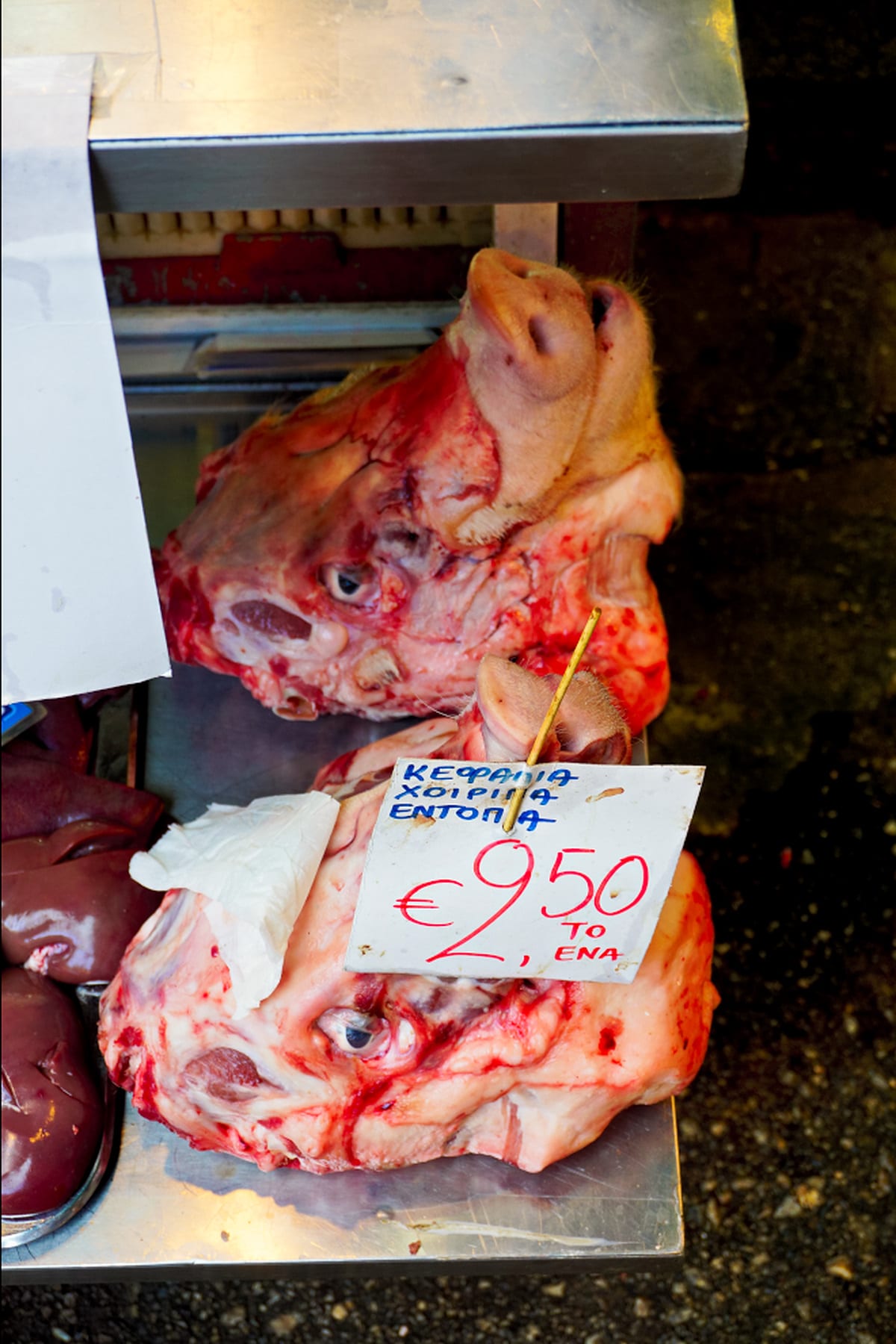 After filling up on cheese, we wandered the markets of Thessaloniki. Due to it being a Saturday morning, they were extra busy. Although we didn’t stop at all, I definitely could have had a bunch of that fruit. Look at those colors!

After the markets, we headed over to this cute cafe where we indulged in tsipouro with ice. Tsipouro is a typical Greek brandy (not to be confused with ouzo, the other popular Greek alcohol). It is really strong so many people dilute it with ice cubes. However, the more ice you add, the cloudier the drink gets. Along with tsipouro we ate meze, the plate above with an assortment of meats and cheeses.

Obviously the tour had to end at a sweets shop! And what better way then to sample a bit of everything? By this point, I actually couldn’t move because I had had so much food!!! All the desserts and pastries were so sweet, sugary, and syrupy.

I had so much fun on this food tour and would love to do it again if I ever go back to Thessaloniki. Between my knowledgeable and engaging guide to the abundance of food, there was never a dull moment! Thanks Urban Adventures for such a great Tastes of Thessaloniki tour!

Interested in more food tours? Check out this one from Paris I took earlier this year!

Even though this is a sponsored post, all opinions are my own. I would never share a product or experience I didn’t 100% love!

My Home on Discovery Channel!