A few months ago, I headed to Prague to attend a week-long conference. Besides meeting so many awesome people (shout out to Emma, Shahzeb, David, Naadiya, Sarah, and everyone else from the conference) and talking about politics for the entire week (I was in heaven), I spent a few days exploring Prague. It has been on my Europe Bucket List for at least a few years and I finally decided to cross it off my list.

After seeing these pictures, I’m convinced you’ll put Prague high up on your Europe Bucket List!

Church of Mother of God in front of Týn is a focal point of Prague’s Old Town Square. This gothic structure is quite magnificent. 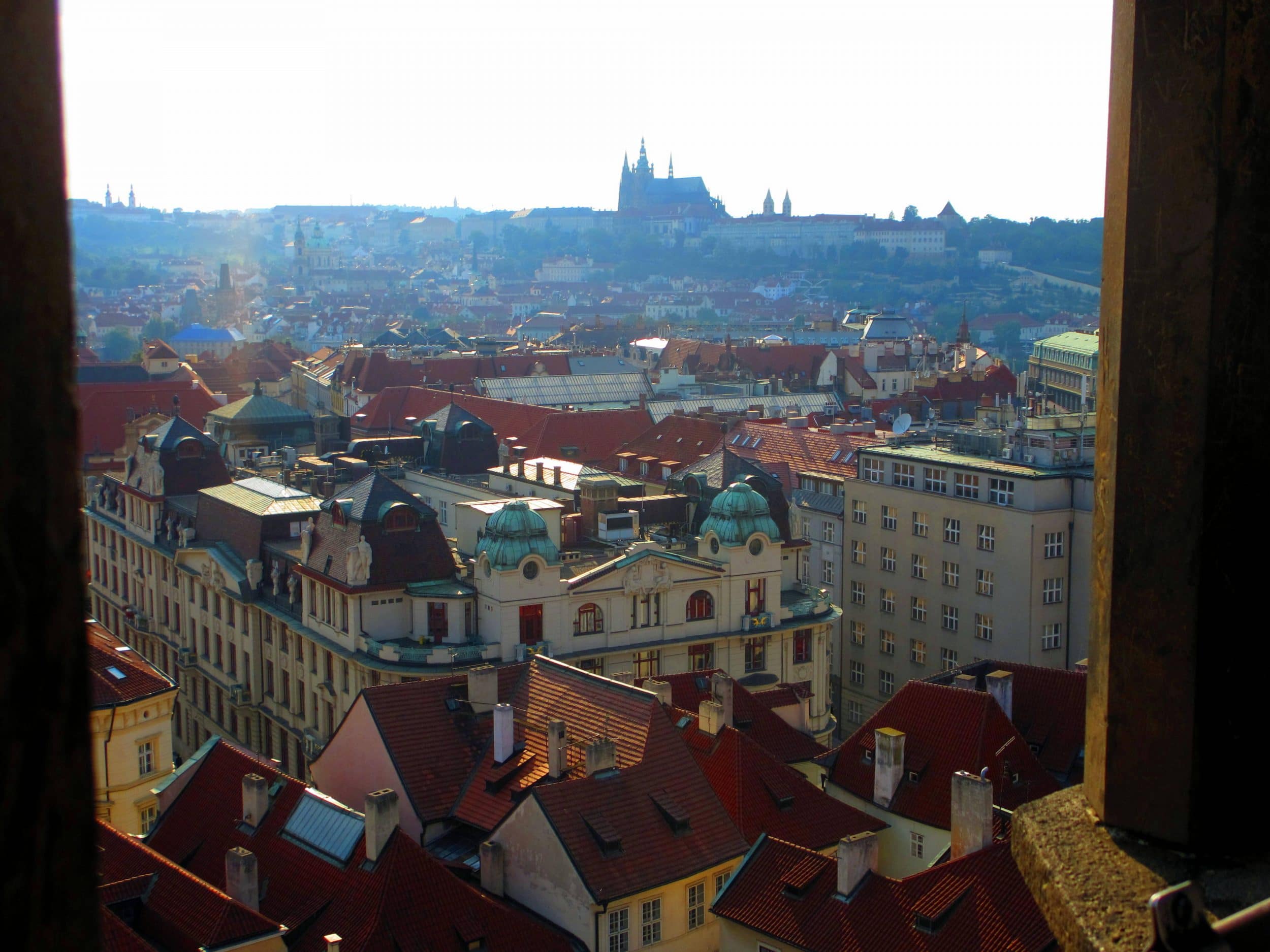 Prague Castle off in the distance!

How can you not love all these adorable cafes and bars lining the Old Town Square?

View from high above the square! I took this from the top of the astronomical clock while looking at the world below. I’d recommend going to the top at sunset to see the golden glow that descends upon Prague. However, this is definitely not the best lighting so if you want top-notch pictures (especially of the Prague Castle), go at a time when the light isn’t so strong :)

St. Nicholas Church in Prague is probably one of my most favorite churches. I mean, look how beautiful it is!!! The white and teal together are so gorgeous! 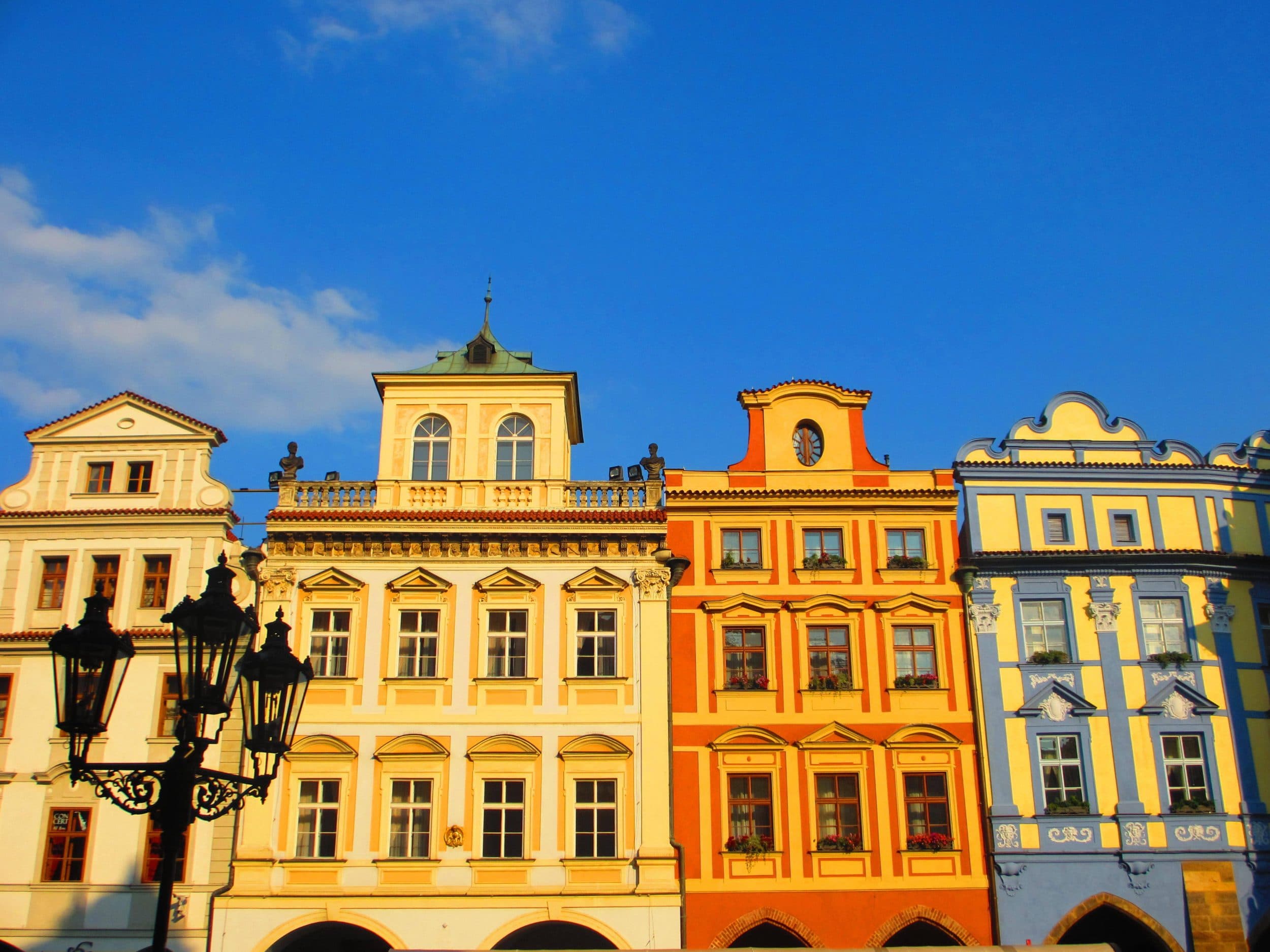 I appreciate all the colors in Prague! The people of Prague especially love the color blue and pink. I approve :)

Oh man, the stunning architecture and colors of Prague did not disappoint! I explored the Old Town Square and the surrounding Jewish quarter around sunset which made the colors even more vivid.

One of the many quaint side streets leading to Prague’s Old Town Square. I mean, seriously people!!!

Hello from the Charles Bridge! Ignore the slightly dorky lanyard from my conference that I forgot to take off before sightseeing!

With my sweet tooth, I should have absolutely loved trdelniks, one of the staple foods in Prague. Between the cinnamon and sugar, as well as being served warm, they are supposed to be melt-in-your-mouth delicious. Maybe I had a bad one but I was not a fan! Next time I’m in Prague, I’ll give them a second chance :)

This is the best view of Prague’s Old Town Square at night. The rooftop bar at Hotel U Prince was definitely a highlight for me and my friends. On the other side of this rooftop, you can see the Prague Castle in the distance!

Prague’s Jewish Quarter is one of the oldest (about 1,000 years old!), most preserved Jewish communities in all of Europe. Located right next to Prague’s Old Town Square, the Jewish Quarter is perfectly intact. However, it is important to note that most of the buildings were razed and rebuilt at the beginning of the 20th century. At the outbreak of World War II about 100,000 Jews lived in Prague, accounting for 20% of Prague’s total population. After the war, the population was about 1/3 of that with the rest of the population perishing in the Holocaust. Today, only 3,000 to 5,000 Jews live in Prague. It is interesting to note that Hitler purposefully did not destroy Prague’s Jewish Quarter during World War II. He wanted to make it into the “Exotic Museum of an Extinct Race.” For anyone interested in Franz Kafka, he was born and raised in Prague’s Jewish Quarter. I would argue that the Jewish Quarter is probably the most beautiful Quarter in all of Prague!

These buildings are breathtaking!

The Jewish Ceremonial Hall. It is now part of the Jewish Museum of Prague.

As always, let me know if you have any questions or comments about what I posted! I’d love to help you plan your next trip to Prague :)