I could spend weeks praising my favorite town in the entire world: Heidelberg, Germany. Beloved by Mark Twain (he lived here for 3 months and the city inspired his book, A Tramp Abroad), Victor Hugo, Ernest Hemingway, and Goethe, the charming city avoided damage during WWI and WWII, and thus much of the city remains the same as it was hundreds of years ago. I got to call this town “home” for almost 2 years and dream of moving back here one day.

I came back to Heidelberg for four days last week and fell in love with the city all over again. The historical architecture, peaceful Neckar River, and grandiose Heidelberg Castle makes for the best combination.

Mark Twain did the best job describing Heidelberg when he wrote,

“The town lay, stretched along the river, its intricate cobweb of streets jeweled with twinkling lights. Behind the castle swells a dome-shaped hill, forest-clad, and beyond that a nobler and loftier one. The Castle looks down upon the compact brown-roofed town; and from the town two picturesque old bridges span the river. I have never enjoyed a view which had such a satisfying charm about it as this one gives.”

And I’ve never enjoyed a town as charming as Heidelberg :) When I was there last week, the weather reached almost 70 F (21 C) so the Prince and I decided to spend an afternoon up at the castle! Man, not only is the castle stunning but the views from the castle of old town Heidelberg are breath-taking! That black and yellow flag is the official flag of the German state Baden-Württemberg. Obviously my favorite state because I also studied at the University of Tübingen (also located in Baden-Württemberg!). 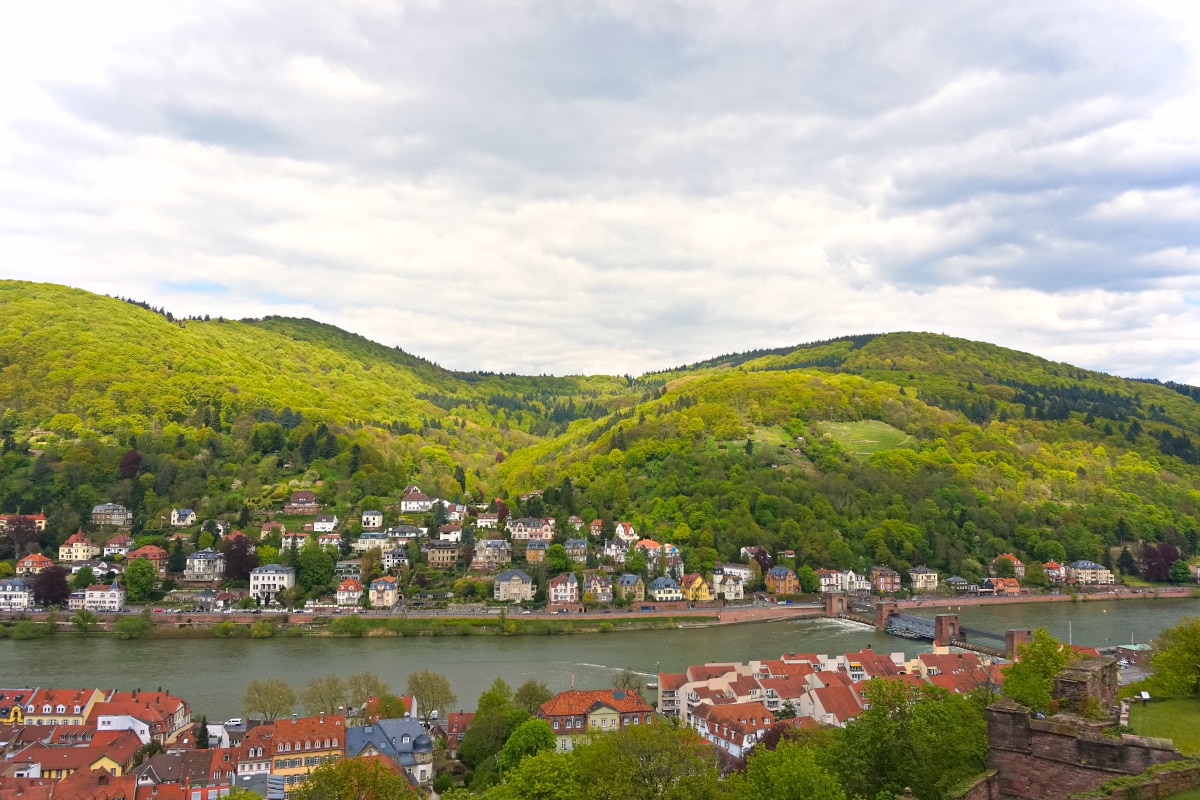 Look at how green and lush everything looks right now! And how blue the sky looks in all the photos. And the red roofs! hahaha, I’m just a bit obsessed with the town.

We might have had a mini photo shoot at Heidelberg Castle ;) But seriously, how could we NOT have a photo shoot? Only took asking three different people to finally get a good picture of the two of us! (seriously, one of the photos was crooked and cut off our heads haha). Also, how adorable is the Prince?! Seriously people, SERIOUSLY!

The most stunning castle in all of Europe! Obviously a bit biased ;) The banks of the Neckar River are just as stunning as the old town of Heidelberg and the castle. Three times each summer, the castle and old bridge are lit up with fireworks to remember two major events to the city and castle. For the first half, the castle is illuminated in red to commemorate the destruction of the castle in the 1680s and 1690s by French troops. The second half of the show involves fireworks to celebrate the marriage of Elector-Palatine Friedrich V (who lived in the castle) to Elizabeth Stuart, daughter of King James I of England. He welcomed her to Heidelberg with a huge fireworks display. The tradition has continued over 400 years later.

Thanks for the wonderful trip, Heidelberg! Hopefully it won’t be another year before I visit you again. Such great memories in this fairytale town :)