There are some places that you visit in life where words and photos don’t even come close to doing it justice. Seven Rila Lakes in Rila National Park is the epitome of indescribable beauty. These photos can’t adequately capture the pureness, vastness, and overwhelming exquisiteness of this national park nestled a few hours away from Sofia, Bulgaria.

Seven Rila Lakes in Rila National Park are a group of seven glacial lakes. Not only are they the most visited lakes in Bulgaria, but they are also one of the most popular hiking spots in all of Bulgaria.

I actually hadn’t planned on visiting Seven Rila Lakes. I initially wanted to spend my last weekend in Bulgaria on the Black Sea. However, with many previous weekends of long travel, my motivation to travel more than a few hours away from Sofia had substantially waned. Plus, a co-worker in the Embassy had come back from Seven Rila Lakes the weekend before and her pictures were absolutely stunning. I just knew I had to make the trek out and see it for myself before I left Bulgaria.

After renting a car, my friend and I were off for the day. I had initially rented a car through Expedia but when I showed up to the location, no car rental service was to be found. I was never charged for that car so I’m really confused at what actually happened. Nevertheless, my friend and I hopped into a taxi to the airport and managed to snag an automatic car there (side note: I really need to learn how to drive stick shift!!!).

Be warned: besides the roads in Sofia and the A1 highway, the roads in Bulgaria are HORRIBLE. I mean barely one lane roads with tight turns and plenty of potholes. I might have accidentally hit a massive pothole and bottomed out our car. Oops! I really am a good driver…I’ve driven in multiple countries and through Michigan blizzards with no ticket or accident ever (knock on wood!). Yet for some reason, I kept making stupid driving mistakes (not my fault that roundabouts in Bulgaria DON’T HAVE LANES! It is a free-for-all!) and my friend was convinced I was the worst driver in the world. We both made it back in one piece without incurring extra charges on the car (or dying!) so all is well :)

To even begin the hike, you take a chairlift for almost 30 minutes up to around 10,000 feet. Once at the top, there is a small cafe, a hotel, and a hostel. That’s it for the rest of the hike so come prepared. Also, my co-worker at the Embassy told me it was freezing at the top so I brought pants, a heavy windbreaker, and lots of layers. Well, it was at least 80F (27C) the entire day and I ended up sweating (and burning!) like crazy. Man, the sun is really hot and piercing that high up.

I have labelled the above photo my Lion King photo. Remember when Mufasa and Simba are talking and Mufasa says, “Everything the light touches is our kingdom.” Yup, definitely had a Disney moment.

I’m not even exaggerating when I say that the water was that clear and that blue! This lake was a few hours into our hike. To be honest, the hike was a lot harder than I expected. It was so steep with lots of loose rocks. When I researched online, I read about all these families doing the hike with their young children. If they could do it, I could do it! However, my co-worker looked a bit apprehensive when I first told her I was doing the hike and was much relieved when I told her one of the Marines from the Embassy was coming with me. She figured he could save me if I injured myself…hahaha :)

All this snow was still left, even in July! I’m not going to lie, I definitely ate/drank some of this snow (we were out of water) and then proceeded to have a snowball fight. Because when else can you claim that you had a snowball fight in July? On top of a mountain at 10,000 feet? In Bulgaria? Yup, you really can’t.

The many faces of hiking with Jordan. This was when I was nearing the top of one of the summits and feeling very proud of myself. And I also thought practicing yoga would be a good idea but was caught midway through a pose.

Due to time constraints (the chairlift closes at 7:30 pm) and our rental car fiasco that morning, our hike was cut short. At the highest point of the hike you can see all seven lakes at once. Unfortunately, we didn’t have enough time to keep climbing and got to the point where we could see five of the seven lakes at once with another one directly behind us. I remember reaching the top and thinking, “Thank God this is over.” and then immediately thinking, “Wait, NO, I wanted to see all seven lakes. I got this high, I might as well keep going.” Time was not on our side and we had to turn back before seeing the last lake. I guess that means I just have to go back?!

Because a trip with Jordan isn’t complete unless I do a jump like that at some point!!! Even looking at this picture reminds me of the pure, untouched beauty of Bulgaria. People, you all need to go visit!

No words necessary. Just take in these stunning views while imagining the wonderful smell of mountain air, fresh grass, and pure water. 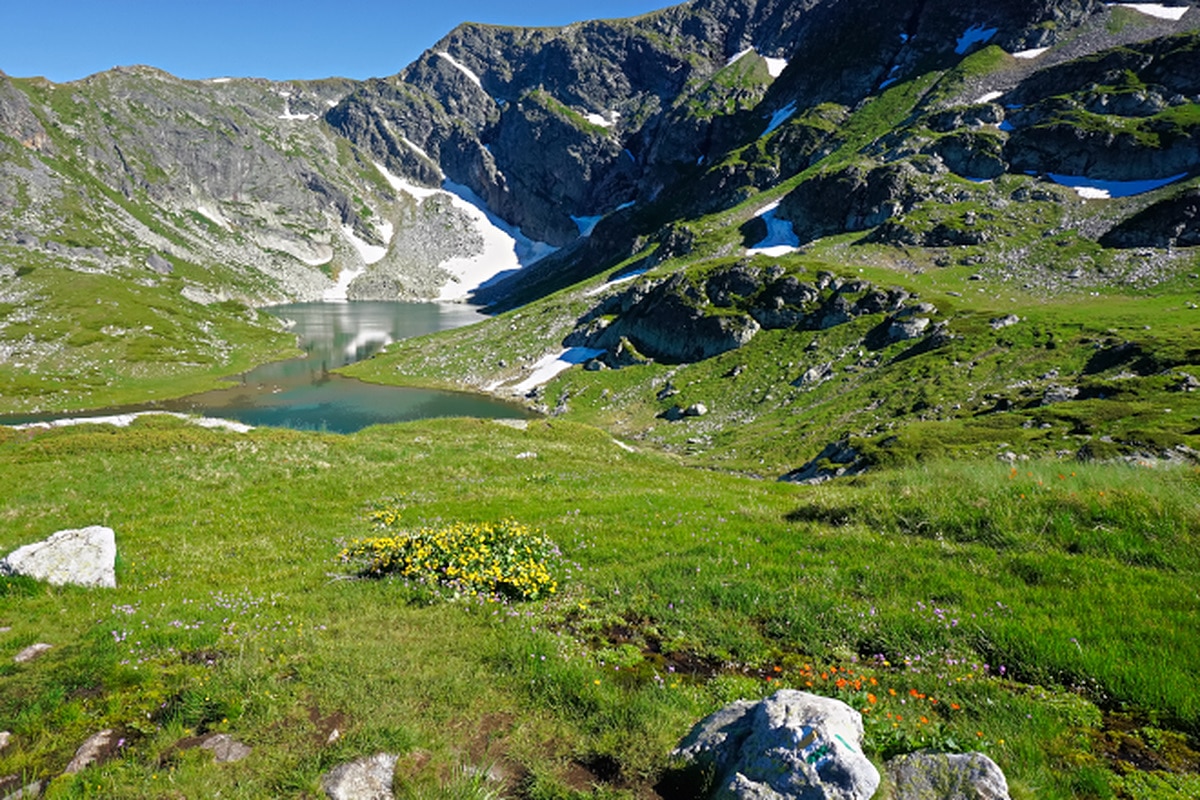 When we decided to turn back around 5:30 pm, smart me decided we should take the route to the right and not to the left (we had taken the route to the left initially). Well, around 6:00 pm, we had a major “oh shit” moment when we realized that a valley/mountain separated us from the chairlift. After running through the valley and back up,  we finally arrived at the chairlift around 7:00 pm. It was then that my friend realized that he had lost his ticket to go back down the chairlift! Thankfully, we were able to buy a new one at the hotel (thanks sweet man who translated that we needed a ticket) and caught one of the last chairlifts going down for the day. I definitely thought more than once, “Oh man, I’m going to be sleeping up here for the night!”

An adorable farm with horses (!) at the top of the chairlift. Totally amazed that people actually live up here. I don’t think I’ll be moving here anytime soon!

This was the valley/mountain we had to get across in about an hour in order to make the chairlift down! I don’t think I’ve ever walked so fast in my entire life. Also, my friend told me after we finished hiking that he was really impressed how far I was able to go that day and he assumed I would want to stop much sooner (I think we clocked in around 11 or 12 miles). I decided to take it as a backhanded compliment ;)

Driving back to Sofia we stumbled across this lake and I had to stop to take a picture. For a moment, I thought I was back in Northern Michigan. Still don’t know where this lake was located so if anyone knows anything about it, please let me know!

Also, Bulgarians love their sunflowers and plant them EVERYWHERE! Just one of the many fields we passed on the way to Seven Rila Lakes! I was seriously obsessed with these fields and kept taking pictures.

+ Rent a car! There is no train service anywhere near Seven Rila Lakes. The buses are pretty sporadic and inconsistent. Plus, they don’t take you directly to Seven Rila Lakes but rather a neighboring town. Not worth the hassle.

+ Bring lots of food and water. As I mentioned earlier, there is only ONE PLACE to get food and water at Seven Rila Lakes and that is right at the beginning of the hike as you get off the chairlift. We definitely didn’t bring enough water.

+ Wear layers. Even though I complained about how hot it was, my co-worker who went the weekend before was absolutely freezing and bundled up at the top. The weather can change quickly!

+ Have sunscreen and use it. Even if you don’t think you need it, put it on before you even get on the chairlift! My brain saw the snow and thought, “I don’t need sunscreen!” Let’s be honest, the reflection from the snow probably made the sun even more intense.

+ Get to the Pionerska Chairlift right when it opens. The most recent times in the summer are 8:30 am – 7:30 pm. Everywhere I read online says that you should be able to do the hike in 4-6 hours. We hiked about 5-6 hours and only got to the point where we could see five of the seven lakes in a row so definitely budget more time than you think you need.

+ Go in July and August. The weather is a bit more consistent those months. The rest of the year, the weather can change quickly and dramatically. The lakes usually freeze in October and melt around mid-June. When I went this year, most of the lakes still had icebergs floating around them.