Oh Skopje, where do I even begin? You’re the weirdest, gaudiest, strangest, coolest city I’ve ever visited. Known as the mini-Vegas or the Disney World of the Balkans, Skopje manages to pack in more entertainment than I thought possible in a very small amount of area. And Macedonia, thanks for being country NUMBER 30 for me!

Before posting anything else about Skopje, it’s important to know about Skopje 2014. Skopje 2014 was announced in 2010 and supposed to be completed by 2014. Like every construction project, it is still not completed and severely over-budget. With an initial budget of 80 million euros, there are estimates that the project has now exceeded 1 billion euros! What makes it even more controversial is that while the government of Macedonia is spending all this money on transforming the city, over 1/3 of the population lives below the poverty line.

So what exactly is Skopje 2014? Skopje 2014 is an infrastructure project aimed to give the city of Skopje a more “classical feel.” However, it went a bit over-the-top! Skopje has a complicated past and confusing population. When Macedonia declared its independence in 1991, it faced a backlash from Bulgaria, Greece, Serbia, and Albania. To the Bulgarians, the Macedonian language is merely a dialect of Bulgarian. To the Greeks, Macedonia is trying to steal the identity and symbols of Greece. Serbians are upset over Macedonia’s religious identity and ethnic Albanians want to be recognized as equals to ethnic Macedonians. This has created chaos in defining Macedonia’s identity both internally and externally throughout the Balkans.

In 2008, Greece blocked Macedonia’s invitation to join NATO. This angered Macedonia and many believed that Skopje 2014 is a response to this. Macedonia is also a region in northern Greece so the country of Macedonia is officially known as the Republic of Macedonia to distinguish itself from the region in Greece. This naming has still angered Greece, who refuses to allow Macedonia into NATO unless they change their name. Through Skopje 2014, Macedonia has essentially “stolen” history from Greece. They claim that Alexander the Great was Macedonian and erected a giant statue of him in the city center. Furthermore, they renamed their main airport “Alexander the Great” airport. Well…that didn’t go over too well with Greece, which has an “Alexander the Great” airport in the Macedonia region of Greece. I wonder how many people have mixed up those two airports :)

Instead of relating to their recent Slavic past, Macedonia chose to revert to their ancient past and identify more with ancient Macedonians (aka ancient Greeks). Quite frankly, the city appears confused. Between the outrageous amount of statues of so-called Macedonian heroes (seriously, like thousands of statues) and the flamboyant neoclassical building structures, Skopje is simply a hot mess. But a cool hot mess that you end up really enjoying. That hot mess where you can’t avert your eyes because you want to see what happens next (in this case, the drama between Macedonia and Greece).

^^ One of the more controversial statues in Skopje. All the statues in Skopje are clothed, even statues that are typically nude in Greece. Most of the population has blamed the ethnic Albanian Muslims for wanting the nude statues clothed. The statue above depicts Alexander the Great being breastfed by his mother, with her one breast fully exposed. This statue is right at the entrance of the Old Bazaar, the Muslim area of the city. Unsurprisingly, this is the only statue in all of Skopje that isn’t fully clothed. Coincidence? Or not? I’m going with the latter.

As kitsch and flamboyant as the statues and buildings are in Skopje, I can’t help but absolutely love the Macedonian National Theater. When it is lit up at night, the colors and statues are absolutely gorgeous. The statue in the last photo depicts the deportation of Jews from Macedonia during World War II. Between 4,000-7,000 Jews were deported and there are currently only around 200 Jews left in Macedonia today. This is one of the most thought-provoking statues in all of Skopje. 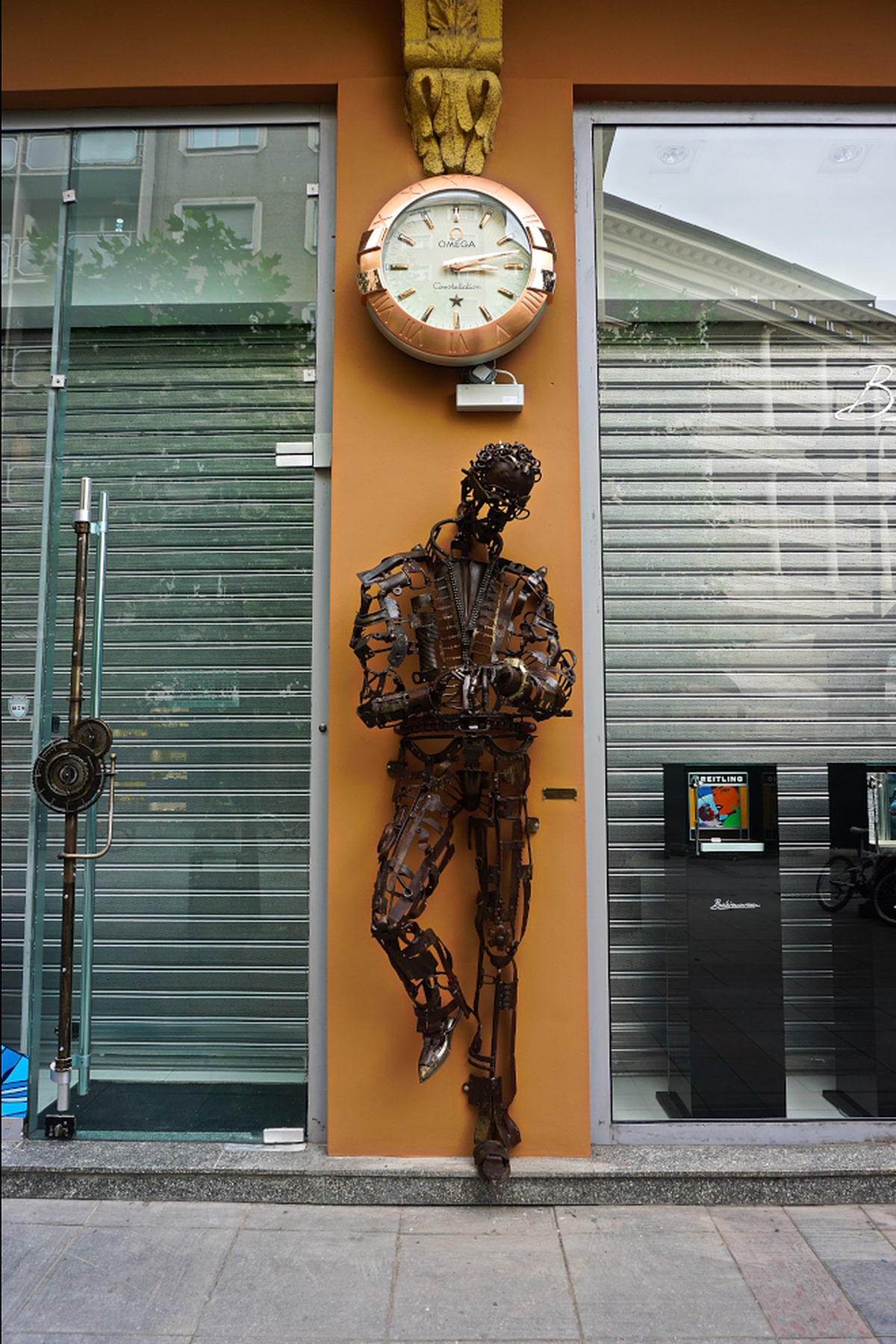 Due to Skopje 2014, Macedonia is in a political crisis. After months of protests and revolts (that sometimes turned violent), the Prime Minister agreed to hold elections next year. Skopje 2014 involved many cases of corruption, fraud, and bribery. While I missed all the protests by about a week or two, the city is still under quite a crackdown. I accidentally walked down a side street and was confronted by many armored vehicles and about 50  police officers in bulletproof vests. Yaaaa, I turned around and decided to go down a different street! 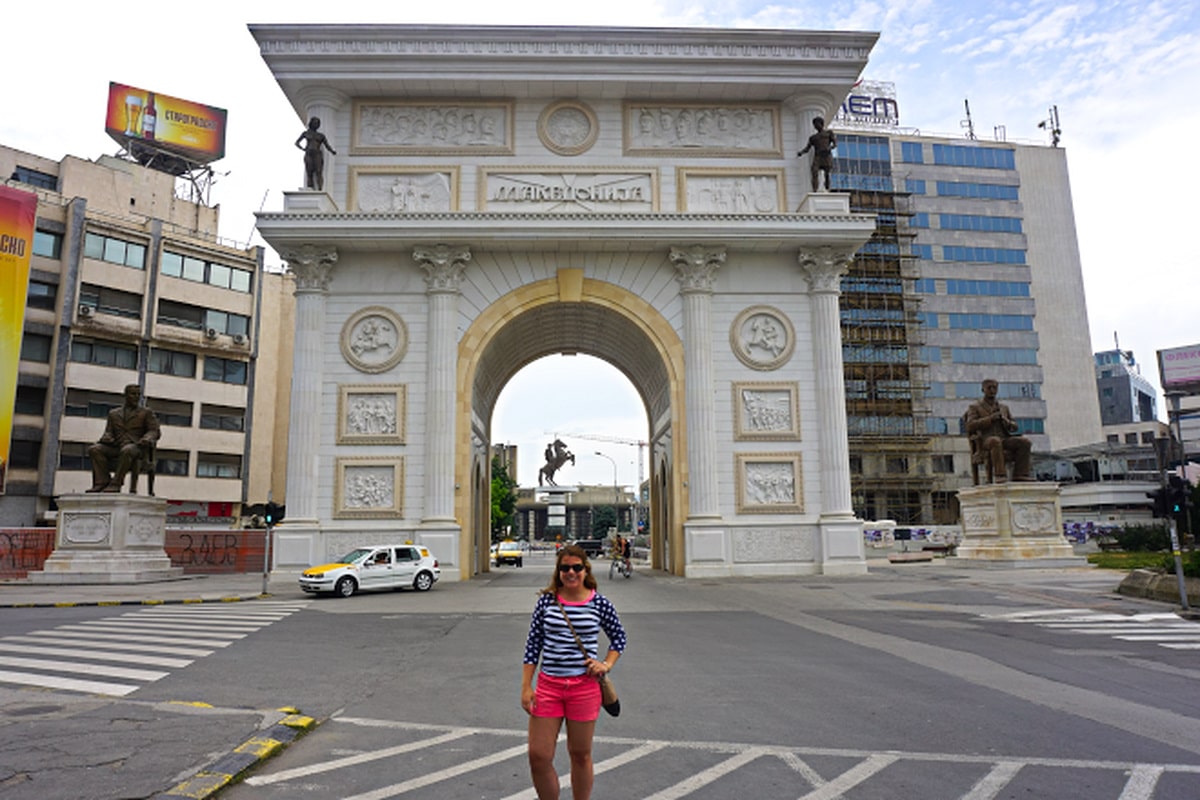 Heyyyyyy, welcome to Paris…I mean Skopje! And guys, it was Flag Day so don’t judge me too much for wearing an American shirt!

And at last, the infamous statue of Alexander the Great in the middle of the city. For how controversial a statue this is, it is quite stunning!

I’d love to go back to Skopje and Macedonia someday because there is still so much I want to see and do. Plus, everyone is so incredibly friendly there! It may be a strange city but it makes you keep wanting more.

Question: What’s the weirdest city or place that you’ve ever visited?