I know that Colmar, France is considered the inspiration for Beauty and the Beast but the writers clearly didn’t pass through the Alsace town of Kaysersberg, France! I arrived in Colmar on a Saturday morning and immediately dropped my bags in my hotel before catching a bus for a magical day trip to Kaysersberg, France. Due to multiple recommendations and an overabundance of Pinterest photos, I knew that I had to visit this adorable town. While the bus schedule was a bit confusing (more about that below!), Kaysersberg was less than an hour bus ride from Colmar. If you’re ever in the Alsace region, you must take a day trip to this fairy tale town.

Even with a population of less than 3,000 people, this charming town on the Alsace Wine Route is bustling with colorful buildings and quaint architecture. Having been growing wine for over 400 years – and still being one of the main economic sources for this town – Kaysersberg is not to be missed by any wine lover (or photography lover or really anyone that loves quaint villages)! Due to its size and compactness, it is easily doable to see the town in an afternoon.

The first wine vines were actually brought to this region from Hungary in the 1600s. The region and town are especially known for their pinot gris variety, still one of the main wines produced. If you’re looking for an extra special wine experience, make sure to stop by Domaine Weinbach winery. 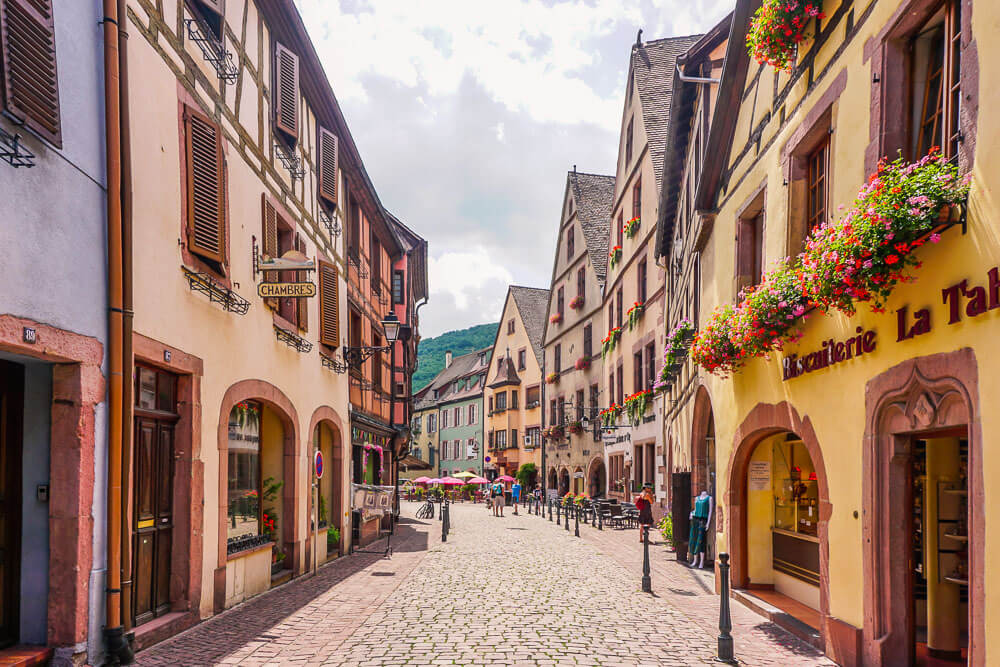 This medieval town was originally mentioned in 1227 when Emperor Frederick II of the Holy Roman Empire acquired a castle in present-day Kaysersberg. Initially named “Kaisersberg” (in German) or “Emperor’s Mountain,” the town quickly rose in prominence and the castle became a strategic fortress in region against the Duchy of Lorraine. By 1293, the city was declared a Free Imperial City (just as Colmar was) and in 1354, Kaysersberg entered into the Décapole alliance – a pact between ten Alsatian towns and cities that advocated maintaining their own rights as Imperial cities while providing assistance and protection to each other.

The Décapole alliance was disbanded in 1679 following the annexation of the entire region by King Louis XIV of France following the Thirty Years’ War. By this point, the town was almost completely abandoned due to destruction and it wouldn’t repopulate until the French Revolution almost 100 years later. Similar to Colmar, Kaysersberg was annexed by Germany in 1871 and returned to France after WWI. Even though the town has technically been French for the past 100 years, the architecture, name, and local cuisine pay homage to the town’s German roots.

In 2017, Kaysersberg was named France’s favorite village, beating out 12 other finalists. It won due to its friendly locals, walkable streets, and adorable architecture (look at all the half-timbered houses!). To be honest, due to the German influence, it felt like I was in a German village most of the time. And while the town sees about 700,000 tourists a year, it still seemed quite empty when I visited (even though it was a weekend in July). Even more reason to take a magical day trip to Kaysersberg, France! ;)

Maybe it’s the American patriotism in me but I absolutely love seeing flags flying! Due to Germany’s history, you barely ever see a German flag flown or shown (this is actually an upcoming post by the Prince – a look at nationalism and patriotism in Germany versus the USA). When I saw this French flag, I had to stop and take an excessive amount of photos.

On the side of the main church was this plaque commemorating the liberation of Kaysersberg in December 1944. Out of all the countries I’ve visited in Europe, I think that France still remembers WWII the most. When I was in Normandy during the 70-year anniversary of D-Day back in 2014, there were still lots of signs, plaques, and even store windows thanking the British and American troops for their help during the liberation (something that my parents also talked about when they were in that same region 25 years earlier). It definitely puts a lump in your throat and makes you just a bit more patriotic.

How adorable is that man in the white t-shirt looking out of his window? What a wonderful view he has (and the stories/people he must observe!). As I mentioned, Kaysersberg really is the most romantic, fairy tale, magical day trip from Colmar. I’m so happy I stumbled upon this town and can’t wait to spend more time here in the future!

Tips + Hints For a Day Trip to Kaysersberg: 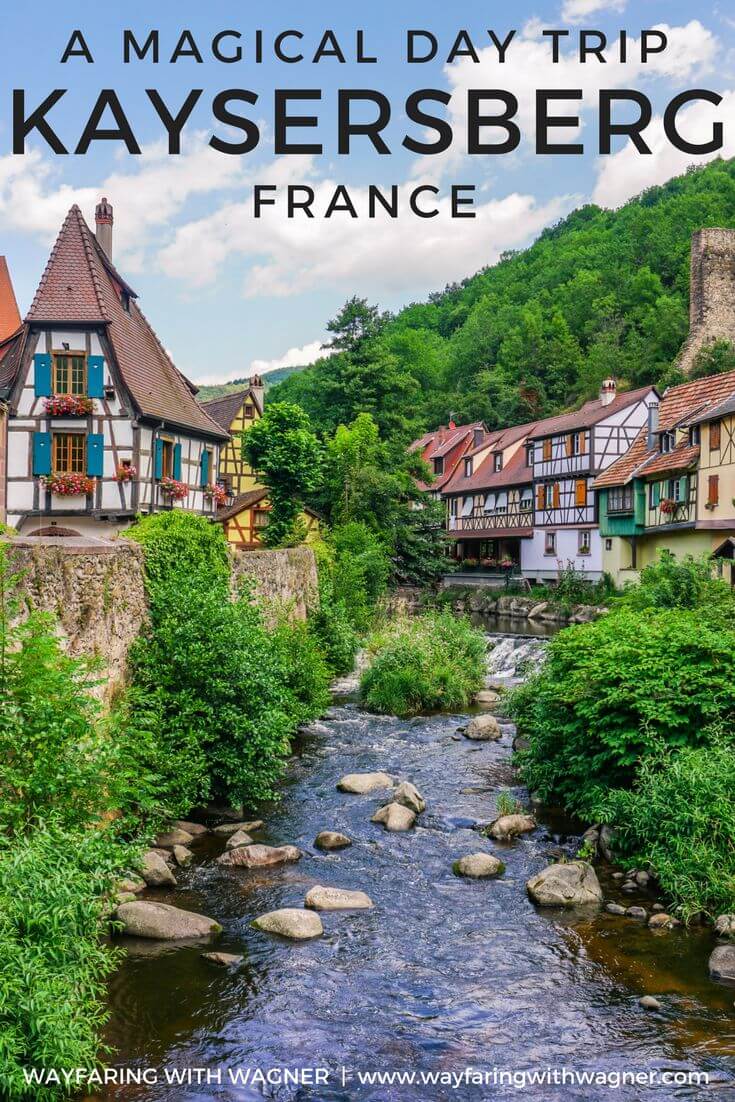 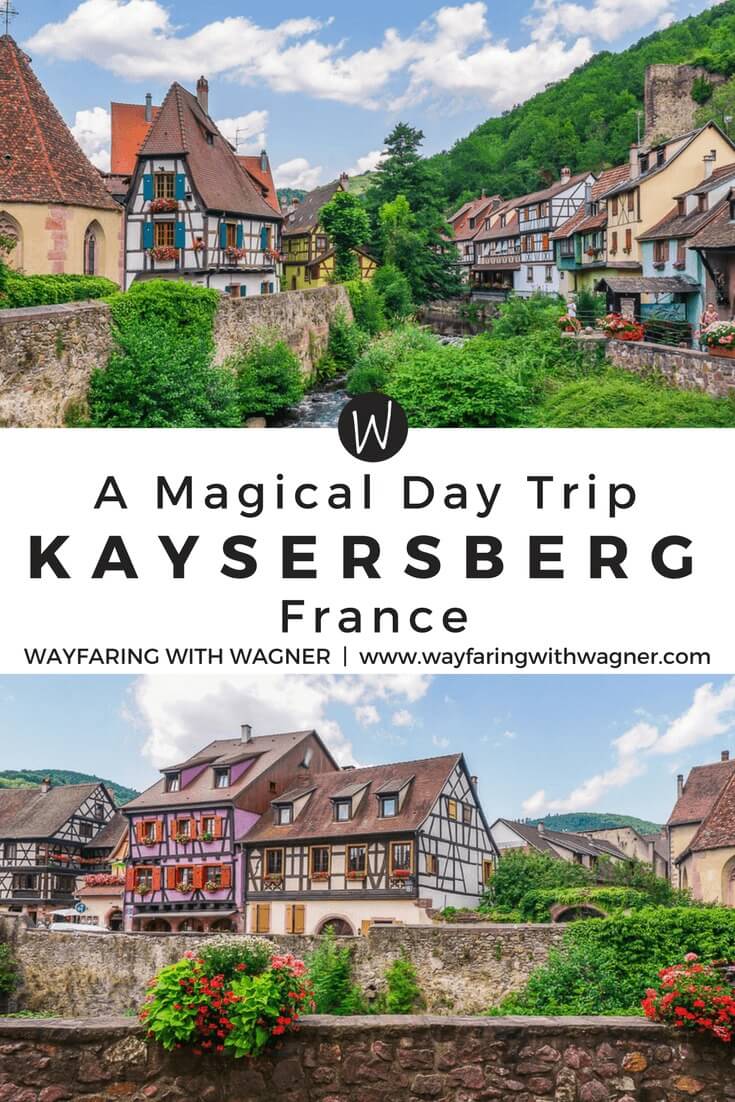