A couple of months ago, I clicked on an article that came up on Facebook titled, “19 Places in Europe You’ve Never Heard Of” and immediately fell in love with the historical town of Dinant, Belgium. The more I read about this town, the more I was convinced that I needed to visit it. With a population around 14,000, it is incredible the amount of amazing food, culture, history, music, and architecture crammed into this adorable town. With Ryanair flights from Hamburg to Brussels for less than 30 Euros round-trip, it took very little to convince the Prince to book tickets with me. Off we were to the historical town of Dinant a few weeks ago!

Dinant, Belgium is located in the French-speaking part of Belgium (Wallonia). While I’ve taken multiple trips to Bruges and Ghent, I had never ventured into southern Belgium (Dinant is only 15 minutes from the French border!). The amount of construction in the city is staggering – the entire waterfront area is being reconstructed right now. The Prince explained this was probably an EU-funded project due to the high unemployment rate and low GDP per capita in Wallonia compared to the Flemish/Dutch-speaking area of Belgium (Flanders). There is definitely a different feel and atmosphere in Wallonia compared to Flanders. 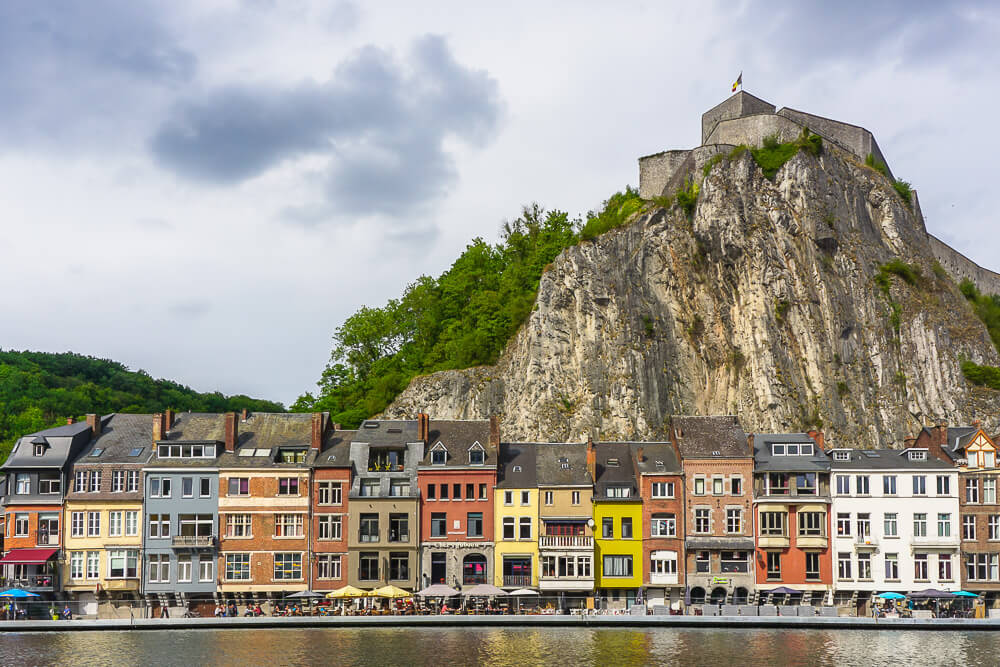 How could you not fall in love with Dinant after seeing these pictures?! Besides stalking pictures of Dinant on Google, I knew relatively little about the town before arriving. First fun fact – Adolphe Sax, the inventor of the saxophone, is from Dinant. That’s why the entire main bridge is lined with saxophones in this post’s first photo! Each saxophone is meant to represent an EU country. The giant, life-sized saxophones aren’t just on the bridge – they’re also located all around the city. A really awesome tribute to Adolphe Sax! 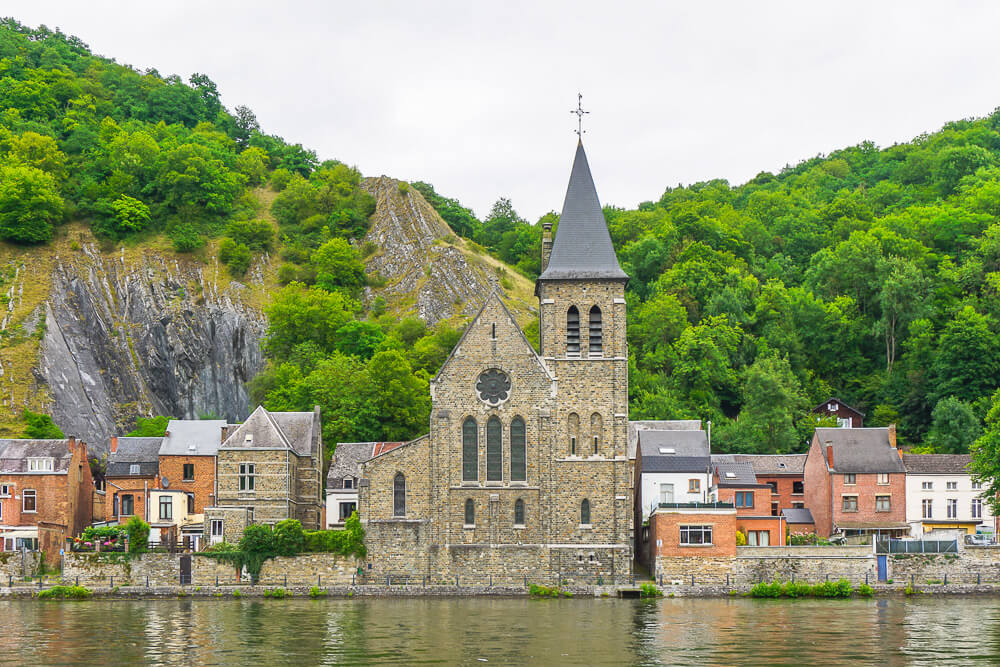 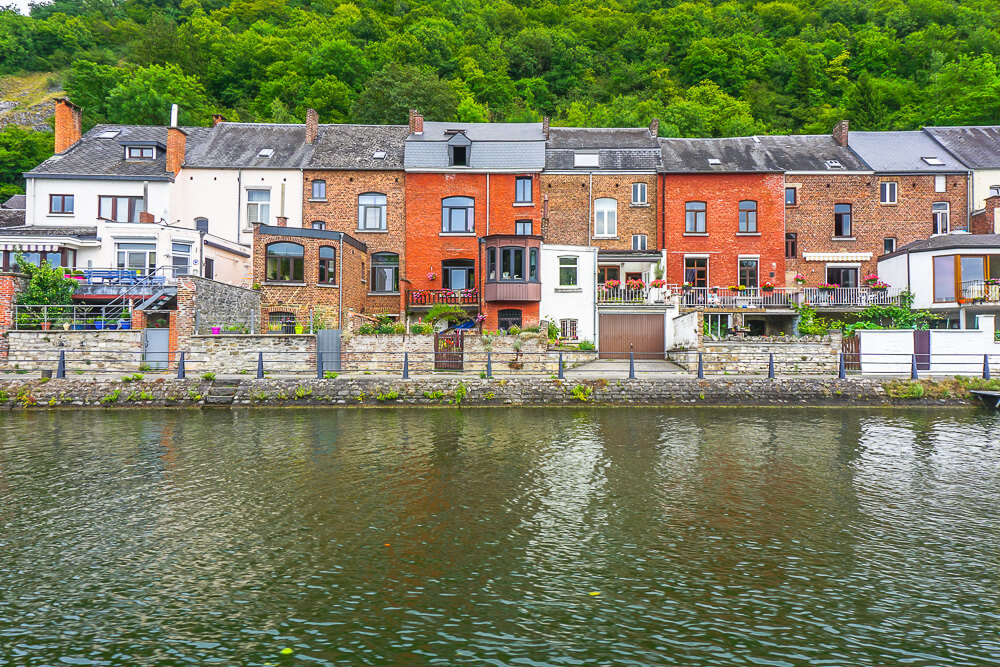 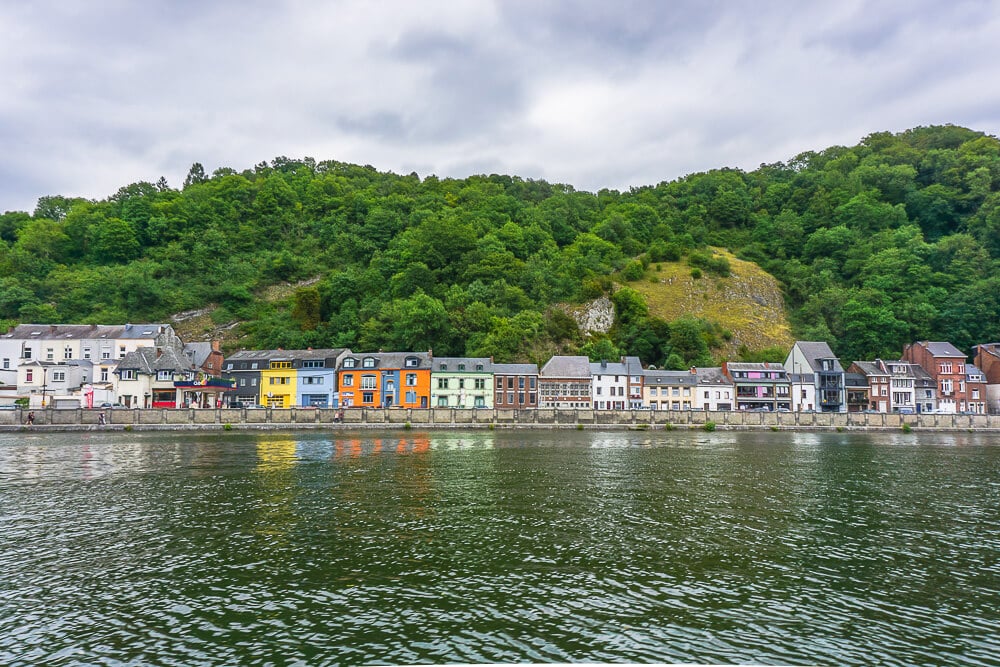 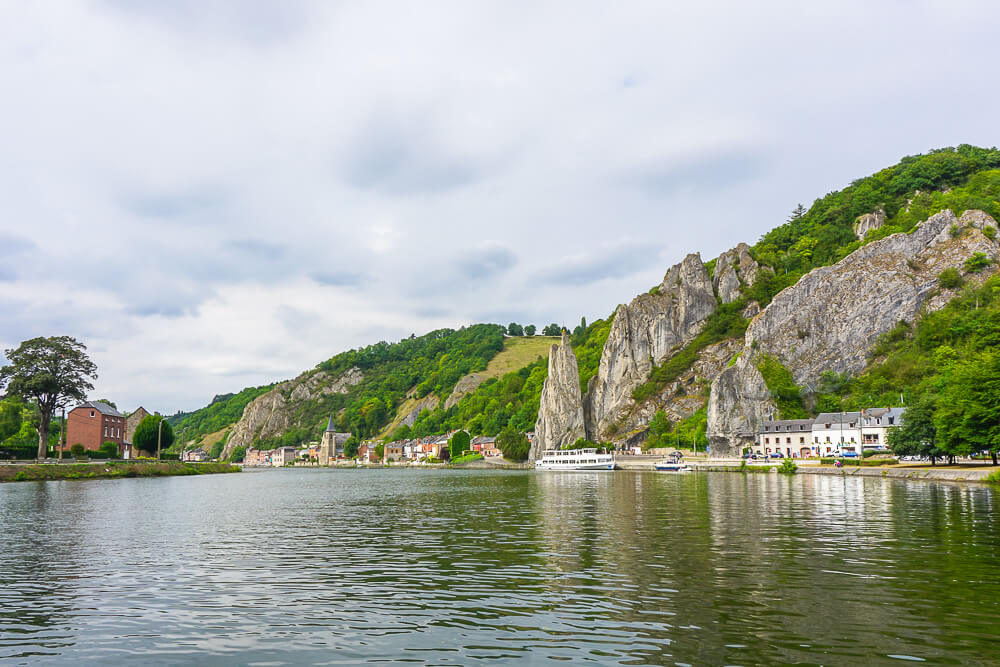 Being the slightly crazy travelers we are, the Prince and I took a 6:30 am flight on a Saturday morning to Brussels. After arriving at the airport, we were able to catch a train from the airport to Brussels-Luxembourg station and then another train from Brussels-Luxembourg to Dinant. The train ride from Brussels to Dinant takes between 1.5-2 hours total. Once we arrived in our hotel around noon (we stayed at the Ibis right on the water and loved it), we both crashed until 3 pm.

After waking up slightly dazed and confused, we decided to rent a boat and take a cruise down the Meuse River. Mind you, the boat went maximum 5 miles per hour, but it was probably our favorite part of the trip. We went to a grocery store beforehand, bought lots of yummy French/Belgian food (and potentially Oreos…ha!), and set out for our hour boat ride. The Prince was in charge of driving while I was the designated photographer ;) Most of the above photos are from the river!

^^^ You know what’s not pictured in the above photo? Me sitting inside of the cannon. The Prince unfortunately cropped it out of the photo! Regardless, I told him that it might just be my new favorite photo! Also, I’m kind of obsessed with my Detroit Tigers hat. I asked my Mom to buy me one when I was last in the USA in May and I don’t think I’ve taken it off since then ;) And duhhhh, my whale sweater is from J.Crew because would you honestly expect me to wear anything else?! 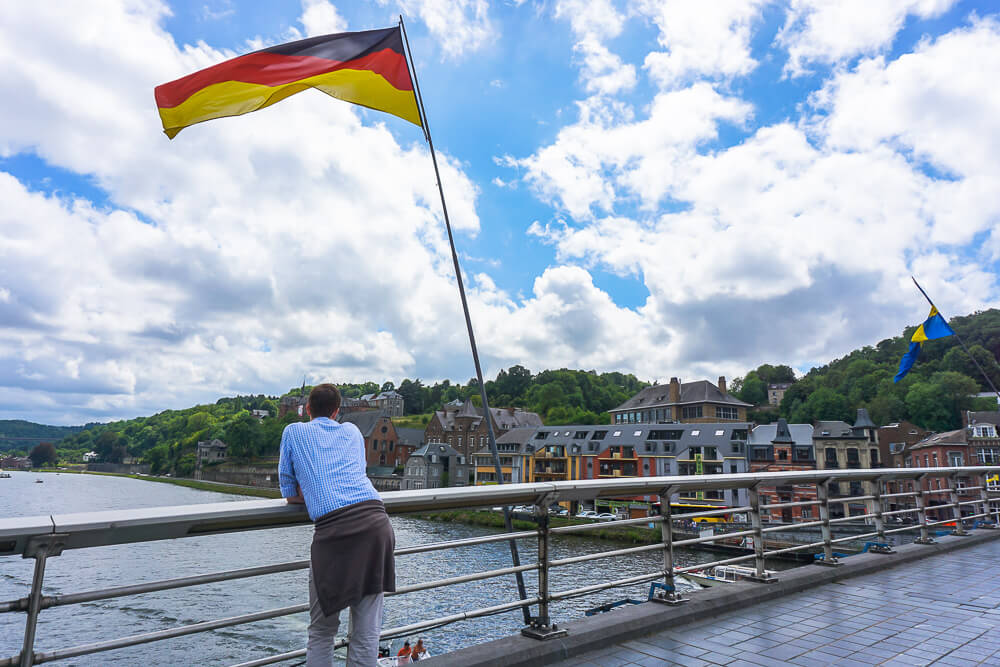 Rising high above the town of Dinant is the Citadel of Dinant, a fortress that was originally built in the 11th century. The historical town of Dinant was first mentioned in the 7th century and took a more prominent position in the region in the 11th century under the Holy Roman Emperor Henry IV (who was actually born and raised in Goslar – a town in Germany I visited earlier this year!). With the Citadel overlooking the Meuse River and Dinant in a strategic location, the town played a defensive role and suffered through destruction, famines, and epidemics throughout its history. The pinnacle moment for the town occurred in August 1914 at the start of World War I.

RELATED POST:  Gingerbread Houses with a Side of Milk // Goslar

After declaring war on France on August 3, 1914, Germany decided to invade France by entering through Belgium (and also Luxembourg). However, Belgium was a neutral state with less than 20,000 troops in its military. Due to its lack of defenses, France took on responsibility of defending the country. On August 15, 1914, in one of the first battles of World War I, French and German troops fought in Dinant during the Battle of Dinant. While the Germans initially gained control of the Citadel (it was only defended by a few French troops), the French quickly recaptured it and managed to defend the city until August 23, 1914.

In the midst of confusion, German troops might have accidentally fired at one another. However, the Germans blamed the civilians living in Dinant and swiftly retaliated. Almost 700 of the 7,000 citizens were killed and two-thirds of Dinant was destroyed/burned to the ground. This was subsequently known as the Rape of Belgium. It became not only the largest massacre of World War I during 1914 but one of the largest massacres in all of World War I. It is also interesting to note that one of the first French troops to be injured during the Battle of Dinant was Lieutenant Charles de Gaulle. A plaque on the main bridge (see above photo) denotes the exact spot where he was shot. 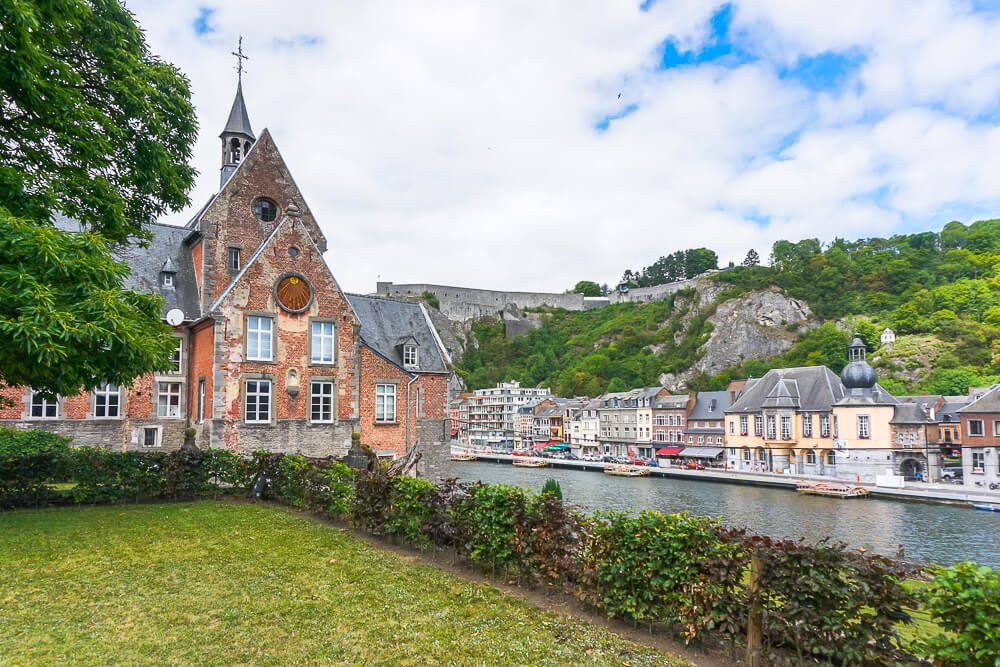 While the Prince and I are the biggest political and historical nerds, we obviously had to unwind before catching our train back to the airport with beer. And it seemed fitting to drink Leffe – a beer that actually originates from Dinant! The red building above is the abbey where the monks originally started brewing Leffe beer in 1240. While the abbey was closed during the French Revolution, it was reopened and renovated/rebuilt in 1929. Even though the abbey no longer brews Leffe beer on-site, individuals are still able to visit the abbey. It is now a hotel, restaurant (with a bar!), and a museum.

If you’re looking for a relaxing weekend trip, I’d highly recommend visiting the historical town of Dinant, Belgium. It is easily reachable, highly accessible, and totally manageable in less than 48 hours! The Prince and I absolutely loved our time there. 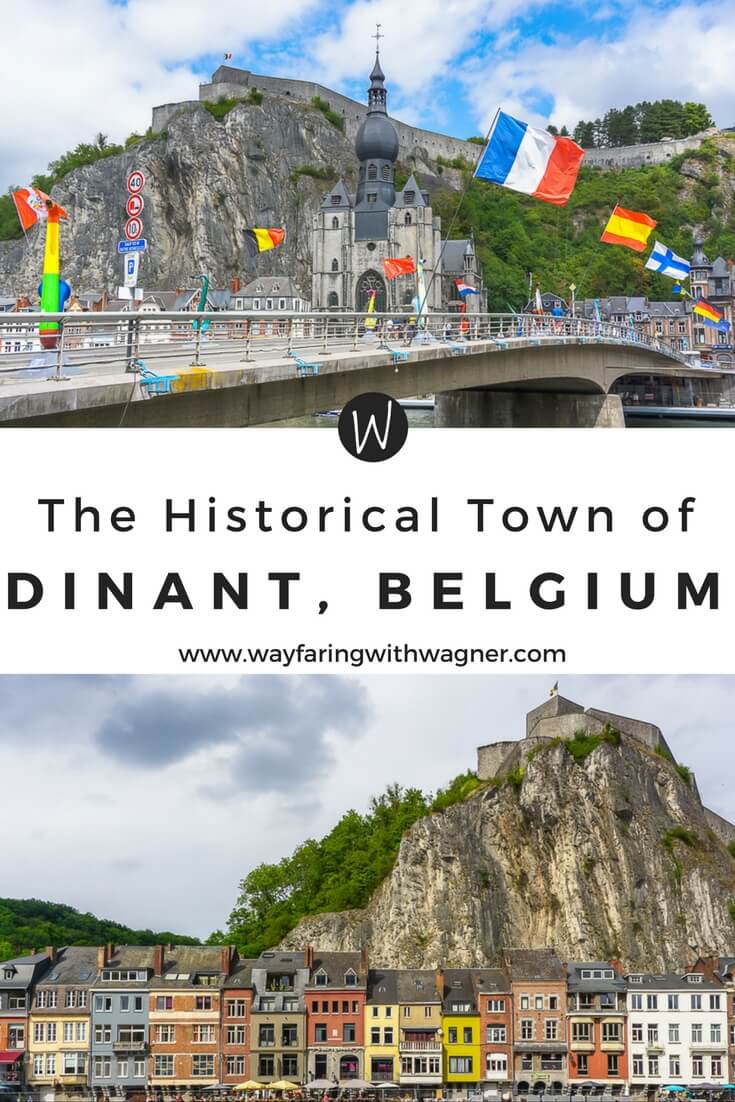 A Weekend Trip to Colmar // France